Sometimes a form will hang up uploading to the platform after the user submits it. This is often due to the user device’s network connection and the size of any media files included in the form (photos, a captured signature field, etc.). If this was caused by a media file not having successfully finished uploading to the server, a message will be seen beneath the form submission entry in the online platform Data Feed, offering quick insight into the problem:

The solution to a delayed upload and associated connector run is the Force Sync button on the local device. Using this button will manually force the device to retry connecting to the platform – which, if successful, will result in the form being successfully uploaded and distributed as designed. This step must be performed on the same local device from which the form was originally submitted. Note also that if the initial failed upload was due to a poor network connection, this step will be most successful when the network connection has improved.

To access the Force Sync button, the user should click the Settings icon in the upper-right corner of the app screen (highlighted below):

The Force Sync button is located above the Log Out button at the bottom of the screen that follows: 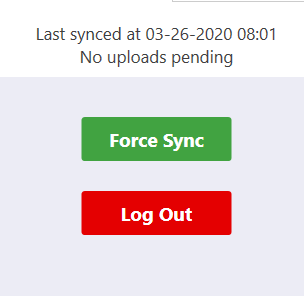 When does the app synchronize/check for updates?