Often you will want to make changes to an existing published screen. Our platform lets you do this by creating and publishing new versions of your Screens, allowing you to rapidly iterate your Screen designs based on user feedback.

The published version of a Screen is considered to be the current stable, production copy for all users, and the platform automatically pushes this version to your app users. This great Publishing functionality has some risks, though, if you want to make any changes and test out the changes as you go. If you were to publish a new Form design every time you want to test out some Screen changes, you would risk disrupting live users with a broken/incomplete Screen design. Your users would also be capturing Form entries across many Form versions. This will make it difficult to track down entries in the Data area of the secure website, and also means you would have many different Form field configurations to account for if you do any integration.

Thus we strongly recommend you use our Test mode when you are developing/testing changes to a Form design.

Test mode allows you to test and tweak your Screen changes during the design process. Instead of continuously publishing new versions to see the changes on your device, you simply save changes in the relevant Screen designer while in Test mode, and then sync these changes to your device. Make more changes and test again - without having to publish a new version of the screen every time. It's a simple and easy way to iterate on your design, figuring out formulae and other functionality you desire. All you need to do is to hit the MANAGE TEST button in the designer and then choose who will participate in the test.

Note that the MANAGE TEST button is only available on screens that are in Draft status. If you have a Published version, then you will need to first hit the NEW VERSION button. A new version of your screen will then be available in Draft status.

When you put a screen into Test mode, you must nominate the particular users that should see the Test version. Often this might just be yourself as the designer, but you can also add more users later if you want to expand the testing group. Please note that only active users will be available to add to the test; users who have only been invited will not appear for selection. Users must have signed into a mobile app at least once to be eligible for a test.

While a screen is put into Test mode, the Published version (if one exists) will remain visible to everyone else. This way you are free to change the screen design as much as you like without fear of disturbing the stable production version of your screen. As long as the form is in Test Mode, your testers' forms will update every time you save changes to the form design after they use the Force Sync button on their respective app settings screens. This makes it easy to make a change, save the design, then jump over to your device to test it out. 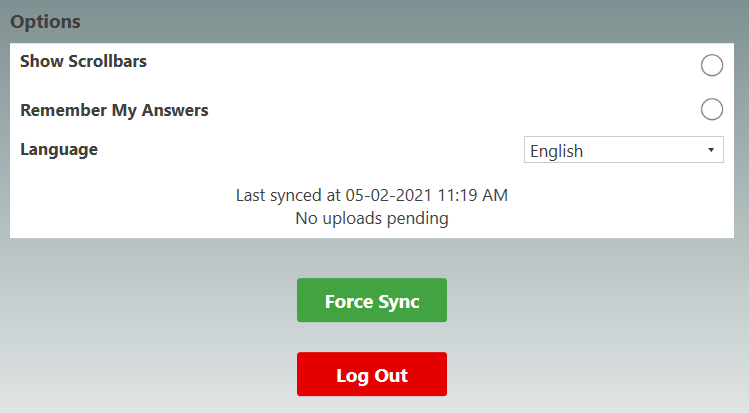 Once you are done with your testing and have finalized the design changes, you're ready to roll out the new version to all your users. To do this, simply hit the PUBLISH button: this will end the Test mode on your new version and set the version as the current Published copy for all users to see and use.

Rollback to a Previous Form Version

If too many changes have been made to a form in test mode, and you need the form to look and behave the way it did before all the changes or you simply want to roll back to a previous version.

You can achieve this on the Settings page of a form where you can view the form's Version History on the right.

By selecting an archived, published, or draft version of the form, the context of the Settings page will change to that version.

After opening the version you want to revert back to, simply export that form's version (XLSX spreadsheet) and import into the new version you are working on in draft status.

If you are unsure of the design of a particular version, while in the context of that version, you can select the option Design, at the top left of the screen, to view the form and make sure it is the version you want.